How To Discipline Your Little Einstein

Posted on May 11, 2013 by John Salmon
Children are smart. I may be preaching to the choir, but I have to say it again,

“Children are really smart!” They are like little scientists, observing everything and figuring out what makes it tick. They study the properties of objects by banging, shaking, throwing, and squeezing them in order to discover what is hard or soft. Children study flight properties by hurling objects through space and laughing with glee at the one that goes the furthest. They are keen observers of people…little sociologists that watch the reactions of people around them and shape their own behavior in response. Case in point: my baby nephew. My wife held him while I hid behind her head. At “just the right moment” I would peak around my wife’s head and say, “Boo.” My nephew giggled each time my face appeared and I sounded the battle-cry of “boo.” We had a fun time. Little did I know how carefully he was observing my every action, soaking it in and remembering my face. The next day, we went to a Chinese buffet. I sat at one end of the table, my nephew, in his high chair, sat at the other end. Between us sat his mother and my wife. I turned to speak to my wife at one point during dinner and saw his little head at the other end of the table peaking around his mother. As soon as I made eye contact, he ducked behind his mother…and laughed. Moments later, his head appeared again and, with the same stealth, quickly disappeared amidst a giggle. My nephew remembered the game we had played the day before. He could not say my name yet, but he had studied me and the game we had played. A day later, he used that game to get my attention.
Our children study our every move. Realizing this truth will impact how you teach and discipline your children. My nephew remembered to play that game with me after only one playful interaction. When it comes to discipline, children learn quickly, too. They learn how many times you will repeat yourself before they really “have to” listen. They study you to determine how long they can hold your attention while you refuse something time and time again. Their keen observations quickly lead to accurate conclusions about when your “no” really means “no” and when it simply means “keep asking and I’ll finally give in.” When a parent does “give in” to a nagging child after 4 or 5 repetitive questions, that child learns to continue nagging in the future. If a parent says “no” but then gives in to stop a child’s temper tantrum, the little scientist will reach his conclusions about the benefit of temper tantrums. 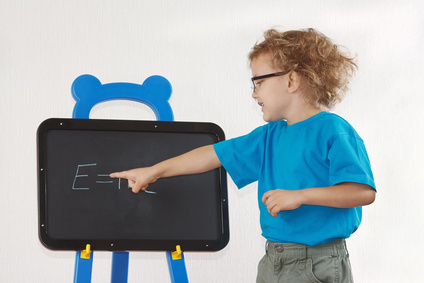 Children are geniuses when it comes to figuring us out. So, even in the midst of discipline, realize that your little Einstein is studying your every move and basing his next plan of attack on your response. Knowing the genius of your children, keep these tips in mind:
·         Let your “yes” be “yes” and your “no” be “no.” Do not change your answer simply because your children nag, persist, persuade, or cajole. Let them learn that your word is good! If you are unsure of whether to offer a “yes” or a “no,” tell them you have to think about it before making a decision. Just be sure to get back to them and give them an answer. Teach them that your word is good!
·         When your children misbehave and a consequence is appropriate, act immediately. When you act immediately to discipline misbehavior, the consequence becomes linked to the misbehavior and will help your children think twice the next time.
·         On the other hand, when your children behave well, let them know right away. Link the consequence of attention, acknowledgement, and validation to positive behavior by responding immediately and specifically to good effort and behavior.
Disciplining children can prove challenging. By acting quickly, remaining consistent, and responding in a way that promotes positive behavior, your little scientist will learn that good behavior gets them want they want more often than not…and with that knowledge they will behavior more often, too.
Posted in Family Shepherds tagged with boundaries, discipline, limits, parenting, teach