In The Male Brain, Louann Brizendine talks about the effect of children on the brains of fathers. Not surprisingly, both father and child benefit from Dad’s attentive involvement in the child’s life. 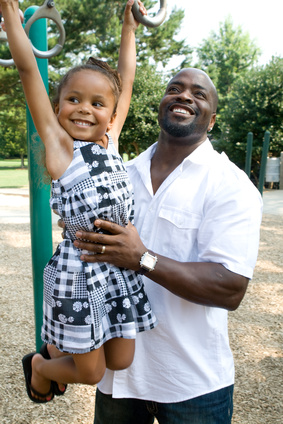 At the risk of sounding simplistic, “daddy time” helps a man become a better father. When a fathers remains actively involved in his child’s life, his brain releases more oxytocin. Oxytocin helps him feel bonded and close with his child. Oxytocin is also associated with generosity and trust, perhaps increasing both for the father in relation to his child. In addition, hands-on fathers have more cells and connection in their prefrontal cortex, the area of the brain involved in decision making, planning, and higher order thought.

Not only do fathers benefit from active involvement with their children, but the children of hands-on fathers also benefit. Children who have active fathers exhibit more curiosity than those without active fathers. Hands-on fathers seem to help improve their child’s ability to learn and increase their child’s self-confidence even into adolescence. Those children who receive active discipline (but not harsh discipline) from a father exhibit better grades. Their sons show fewer behavior problems and their daughters fewer emotional problems.

Time with Dad is a win-win situation. Everyone benefits. So Dad, take some time and invest it in your children. And Mom, move over and let him have some time with the kids. Its good for everyone.