A Child’s Fish Tale & The Freedom of Limits

Posted on January 21, 2012 by John Salmon
Children love to hear stories, especially stories about their parents’ childhood days. One of my children’s favorite stories involved a fish tale I use to tell them. Not just any fish tale, mind you, but a fish tale involving a talking fish named Cokey.  Cokey lived in our aquarium when I was a kid. He hated that aquarium…it was so confining. He could only swim around in circles…back and forth, up and down. The total distance around the aquarium was only 35 “tail waves” (that’s 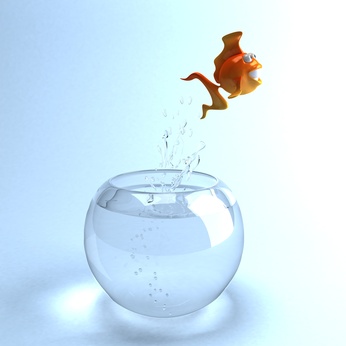 a fish measurement describing the distance around the periphery of an average size aquarium) and he wanted more. His parents seemed perfectly content living in this confined glass bowl, but Cokey wanted freedom. He wanted to live his own life, choose his own destiny. He looked through the glass of the aquarium and longed to sit on the couch. “Cokey,” his parents would say, “You can’t sit on that couch. Be happy in the aquarium where you belong. Enjoy resting by that beautiful fern over there.” Cokey wanted to feel the texture of the carpet, taste the cheese on the coffee table (“oh the power of cheese”), and watch the TV with no glass pane in the way.
“Why should I be confined to this glass prison, Mom?” he asked one day. “The world is full of choices. I can be anything I want to be. I just have to get out from under these glass rules.”
“No Cokey,” his father said, “You need to stay in the aquarium. We live in the aquarium for a reason. We can be everything we want to be here. All our needs are met. You will only find happiness in this aquarium.” Cokey didn’t believe it. On his 4th birthday (that would be 16-years-old in human years), he decided to “take control of his life” and jump out of that aquarium to start his life of freedom. He swam round and round the aquarium to pick up speed.
“Cokey, what are you doing?” his mother asked.
“I am jumping out of this glass prison to start my new life of freedom!”
“Cokey, don’t do it! You need the aquarium. Stay in the aquarium with us. You have everything you need and want here—food, water, companionship. You are free to live a happy life. You’ll be trapped if you leave the aquarium.”
Cokey didn’t listen. He swam faster and faster. He swam so fast his surroundings began to blur. Then, he swam straight for the surface. With one final wave of his tailfin he leapt out of the water and flew through the air, over the edge of the aquarium and onto the carpeted floor that he so longed to touch. “Yes,” he thought to himself. “I made it! I’m free!” But then he realized that he could not breathe. He needed the water. He felt like he was suffocating. He tried to get up, but he couldn’t stand on his fins. He simply flopped around on the spot where he had landed. He began to get scared. Just then, he heard a purring sound. He looked toward the door and saw a housecat walking toward him, licking his lips with every step. “Oh no,” thought Cokey. “Now what will I 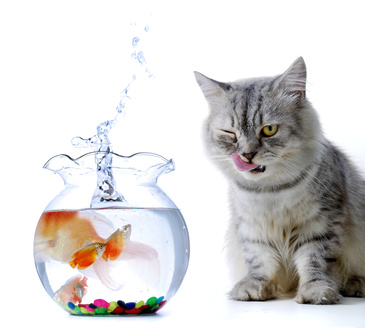 do. I should have stayed in the aquarium and listened to my parents.” The cat walked closer. Cokey began to panic. He couldn’t breathe. He couldn’t run. He closed his eyes and prayed. Suddenly, he felt himself lifted from the ground…but instead of feeling a cat’s tongue lick against his scales, he felt a finger gently rub his side and voice asked, “What are doing out here, Cokey? You’re supposed to be in the aquarium.” Opening an eye, Cokey saw the person who always fed him (my mother, by the way). Cokey took a deep breath of water as the woman gently dropped him back into the aquarium.
Cokey never tried to escape the aquarium again. “I learned something very important that day,” he told me. “I learned that all the choices in the world don’t make anyone happier. No, true happiness is found with my family, living contentedly with those gifts I have. Really, when I accepted the limits of my aquarium, I discovered I was free to be me…there are no limits then.”
We live in a world that shouts out, “Choices bring freedom and freedom produce happiness.” We practically have unlimited choices in TV channels and myriads of choices in salad dressing, entertainment, careers, colleges, classes, etc. Unfortunately, too much choice does not create happiness. Too much choice does not increase freedom.  Instead, too much choice leads to dissatisfaction, frustration, and even sadness. (Watch Barry Schwartz: “The Paradox of Choice“). Choices and freedom do not result in happy children. On the contrary, children flourish under the protection of limits, boundaries, and guidance. They mature and grow best when parents actually teach them to limit superfluous choices. In fact, when children learn to live within appropriate limits, they find that the sky is the limit. They discover greater freedom to become themselves as they live within appropriate limits. Like Cokey, children discover that the aquarium is not such a bad place to live. The message to parents: love your children with age appropriate limits. “He who loves well, disciplines well.”
Posted in Family Shepherds, Grace, Honor tagged with consequences, discipline, limits, parenting, teaching