A Carnival of Parents

Posted on May 22, 2011 by John Salmon
I enjoyed a day at a local amusement park with my family this weekend. My daughters are getting older now and they spend much of the day with their 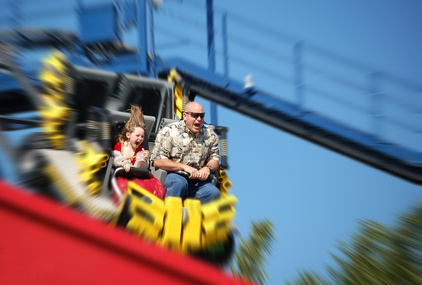 friends; but, we still eat supper together and meet throughout the day. Their independence does allow me and my wife to enjoy time together.  It also allows me some time to people watch. I love to people watch.  At an amusement park you find a whole carnival of people, a funhouse of parenting ideas. I wanted to share some of what I saw.
I saw the “cell-phone-guy.” He stood in line with his child, but didn’t talk to him. Instead, he played with his cell phone. When his child tried to talk to him, the cell-phone-guy nodded his head and said “Hmmm” at best. Other times, he didn’t respond at all. He just stood silently in line next to his child looking at his cell phone. I used to hate standing in lines at amusement parks too. But then I realized that lines were great opportunities to talk with my daughter. We could talk about anything, including things of no importance. We could talk and build relationship. The cell-phone-guy never learned this; so he missed the opportunity of the line. He was more invested in playing a game, checking his e-mail, or texting a friend than in having conversation with his child. This missed opportunity communicates a dangerous message to his child—a message that his child is not as important as whatever he was doing on his cell phone, that a relationship with his child is less important than a relationship with his cell phone. The “cell-phone-guy” eventually produces the “cell-phone-family.” I saw them at the park too. You know, parent and child standing in line, both playing with their cell phones but not interacting with each other at all. “Cat’s in the cradle” I guess. These families left the park at the same time, but definitely not together…traveled home in the same car, but invested in their own isolated world of earplugs and cell phone screens.
I also saw the “just-get-on-the-ride-and-have-fun-guy.” This guy looked tired…and grumpy. He wasn’t having any fun at all. He just wanted to get the day over with. He looked as though he’d rather be anyplace other than the amusement park with his kids–at home watching ESPN, reading the paper, even cutting the grass. When asked if he was having fun, he replied “yes” but his face didn’t get the message. He looked as though a smile might cause a facial earthquake and tsunami that would result in an angry explosion of nuclear proportions. When his children asked about getting a drink, he boiled over…the proverbial camel’s back was broken–“Just get on the ride and have fun!” he “yelled.” Sometimes the “just-get-on-the-ride-and-have-fun-guy” transformed into the “cell-phone-guy” when he escaped into his twitter account to get the update on the recent sporting events or local news. Still, he wasn’t having any fun at the amusement park. Unfortunately, neither was his family. They were walking on egg shells, holding Mommy’s hand and looking forlornly at the lemonade stand they just passed up.
Of course, there was the “attentive-fun-loving-guy” too. In fact, most of the people in the park fit into this category. They were having a great time. Parent and child talking and laughing, pointing out 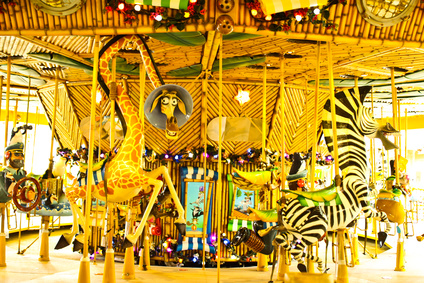 exotic hairdos, screaming joyfully as they flew down the roller coaster, fixing one another’s hair after spinning around like a dryer. These families took advantage of every opportunity to enjoy one another’s company, play together, eat together, and build intimacy. They were all smiles and laughter. They went home exhausted, but joyful.
I’ve been all three of these guys on different occasions. Well, maybe not the “cell-phone-guy” because I’m still working on learning how to text. But, I’ve been distracted by other things–finances, work, the lawn, who’s winning the baseball game. When these distractions became more important than my family time at the amusement park, I became the “worried-about-everything-but-here-and-now-guy,” which is really a prehistoric (pre-technology) version of the “cell-phone-guy,” the “Neanderthal-cell-phone-guy” so to speak. And, I’ve had those days of “just-get-on-the-ride-and-have-fun-guy” as well. I hope that my family remembers me as the “attentive-fun-loving-guy” on most family days. That’s what is important—which guy we are on most of our family days. Who we are most of the time shapes our children’s lives and relationships, not just to us but to others. So, put away the cell phones, set aside the worries and distractions, enjoy time with your family. Become the “attentive-fun-loving-parent.” Enjoy your family…have fun. At the end of the day, you’ll be glad you did!
Posted in Family Shepherds tagged with attention, availability, communication, family intimacy, family relationships, parenting, time