Posted on May 7, 2011 by John Salmon
“Failure is simply the opportunity to begin again, this time more intelligently.”—Henry Ford
“We learn wisdom from failure much more than from success.”—Samuel Smiles
I wanted to grow and harvest raspberries, so I bought some corn seed and planted it in the back yard. Do you think I got a good crop of raspberries? Of course not. I can’t get raspberries from corn. We reap what we sow.  This principle holds true in life as well. We can’t get p

ositive results from negative life choices. We can’t earn a raise by sleeping in and skipping work…or an “A” by not doing homework. We reap what we sow.  You know it and I know it, but how do we teach our children this principle? How do we instill in them the wisdom to make responsible choices? Before I answer that question, let me tell you two things not to do!
1. Do not bail them out. I don’t know about you, but I hate to see my children sad or, worse yet, suffer. Like most parents, I hurt when they hurt. I struggle when they struggle. When my daughters look at me with big puppy dog eyes glistening with crocodile tears, it’s hard to say “no.” When they’ve made a choice that brings a painful consequence, I would rather swoop in and take away the pain than watch them suffer the consequence of their choice. But, if I do that, I do them an injustice. I actually rob them of the opportunity to mature and learn from mistakes. I rob them of the knowledge that actions have consequences. By trying to be their hero, I teach them that comfort is more important than character and letting other people manage my mistakes works as well as accepting personal responsibility. I imply that they are not strong enough to manage the consequences of their behavior independently and they are not intelligent enough to learn from their mistakes. These are dangerous lessons to teach our children…lessons I don’t even believe. Even more, they imply dangerous beliefs about their person that they will internalize into their own self-image.
2. Do not emotionally pounce on them. Sometimes rather than bail them out, we find it easier to put up the misbehavior. We ignore it and put up with it to avoid the conflict. Over time, frustration builds up and irritation escalates until one little thing “sets us off.” We blow our stack and emotionally pounce on our child. We begin to rant and rave about that one behavior that “set us off.” In the midst of ranting, the topic of our rant expands to include every irritating 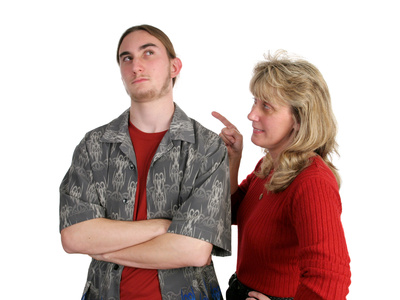 behavior our child has engaged in over the last month. And, our child shuts down, blankly staring at us as we explode in a verbal tirade. Their blank look only irritates us more and we continue the rant. Unfortunately, our child learns nothing except how to make us “lose it.” He does not think about his behavior or the consequences of his behavior. Instead, he complains about us “always yelling” at him. He simply quits listening. When all is said and done, he does not learn the consequence of his behavior. Instead, he focuses on our behavior and walks away talking about his “crazy” parent. We have suffered more as a result of his behavior than he has. And, once again, we have robbed him of the opportunity to learn from the consequences of his mistakes.
3. That explains two responses that won’t work in teaching our children how to make wise choices. What will work? Express empathy while allowing your child to suffer the consequence of his behavior. Allow him the opportunity to learn from the consequences of his choice. By doing so, you show him respect and you communicate your belief that he is intelligent enough to learn from his behavior. This may involve allowing him to suffer, even if that is painful to watch at times. At the same time, express empathy for his pain. “I’m sorry you missed the movie with your friends. However, I asked you to clean your room before you go and you didn’t do it.” That’s it, empathy and limits, compassion and consequence, grace and truth. The balance of grace and truth will allow your child to learn how to make responsible choices. They will have the desire to make responsible choices in response to a relationship filled with empathy, compassion, and grace. At the same time, they will learn that poor choices result in consequences that are more painful than positive choices, misbehavior is more troublesome than good behavior.
Empathy and limits, compassion and consequences, grace and truth–the balance parents have used for centuries to produce wise children who make responsible choices.
Posted in Family Shepherds tagged with character, consequences, empathy, limits, parenting, teaching