Do You Parent With a Club or a Staff?

Posted on August 25, 2012 by John Salmon
Some parents raise their children with a club, others with a staff. A club is used for beating things. Some parents seem to only have a symbolic club for parenting. And, when the only tool you have is a hammer…well you know what I

mean. A staff, on the other hand, is used to guide and direct, to pull a child from danger and to set them on the safe bedrock of family support. Whether you parent with a club or a staff makes a huge difference in the long term effectiveness of your parenting. Club-wielding parents often raise rebellious children. Staff-carrying parents often raise independent and mature children. To help you decide whether you parent with a club or a staff, check out these four tell-tale signs.
1.      Those who parent with a club focus on externals. They want to make sure their family “looks good” from the outside. A club-wielding parent worries what others might think about their family. They believe that any behavior, appearance, or language used by any member of the family is reflection on their parenting…perhaps even a reflection on their worth as a person. Everyone has to look good, behave a certain way, and speak well or the parent feels like a bad person.

Those who parent with a staff focus on internals. Staff-carrying parents are more interested in character development and maturity than external appearance. They realize that how a family member acts and speaks is not a reflection on their parenting, but an opportunity to teach, discipline, encourage, or praise their child and move them toward a more mature lifestyle. The staff-carrying parent knows that how their children behave is ultimately their children’s choice and responsibility. Their children will have to deal with the consequences of their behavior, good or bad.
2.      As a result of focusing on externals, club-wielding parents judge their family members by performance. Family members are good if they meet “my” standard of behavior and appearance and bad if they fall short. This type of conditional acceptance often includes negative labeling as well. When family members don’t show interest in the family activity, they are “disrespectful.” When a child does not feel like doing a chore, they are “lazy.” If a father has to demand his children participate in the Bible study he has prepared for them, they are “undisciplined.” You get the idea.Staff-carrying parents practice unconditional acceptance. They love their children when they behave well and when they misbehave. They love their children enough to discipline the misbehavior, but they do not add negative labels to the children who misbehave. Instead, they offer unconditional acceptance for their children while allowing their children to suffer the consequence of the negative behavior.
3.      Parents who only have a club to use when parenting expect their children to be just like them. The standards and expectations for children in the club-wielding family are based on the parent’s interests and personal 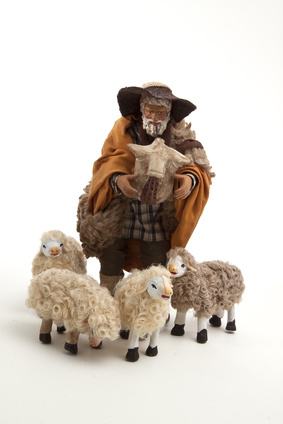 style. If I like to read, my children must read. If I like sports, my children must be athletic. If they are not, we go back to number 2 and give them another label, like “lazy,” “uncooperative,” “ungrateful,” “disrespectful,” or “stupid” to name a few. There is no room for uniqueness. In fact, being different is consider an intentional insult against the family.      Those who parent with a staff become students of their children. They learn about their children’s unique personality, interests, strengths, and vulnerabilities. Staff-carrying parents enjoy their children’s unique qualities and actively seek out ways to allow their children to grow in their special areas of interest. They encourage their children to use their unique strengths, talents, and interests to contribute to the benefit of the family and community.
4.      Club-wielding parents verbally beat their demands into their children with harsh language. They yell. Their tone of voice is sarcastic and angry. Their cadence is broken and staccato. Club-wielding parents not only use harsh language, they also bludgeon their children with nagging. In fact, you may hear many a parent with a club point out that their children don’t seem capable of doing anything unless “I nag them until it is done!”       Staff-carrying parents state the family expectations and values in clear, concise terms. They use a calm tone of voice and normal volume when discussing the family expectations and values as well as the consequences of not behaving in accordance with those expectations and values. They do not nag. They simply state the expectation and then utilize natural consequences to teach and discipline. Staff-carrying parents are able to do this because they have faith in their children. They believe their children can learn from their mistakes and mature in response to consequences.
So, are you a club-wielding parent or a staff-carrying parent? The choice is yours.
Posted in Family Shepherds tagged with accountability, consequences, discipline, encouragement, parent child relationship, parenting